Come on get happy! Whether you’re spending the day at a music festival or simply enjoying a sun-soaked afternoon, this colorful gel nail set will give you instant endorphins. The golden yellow and purple compliment each other oh-so-perfectly, while the florals, hearts, and rainbow designs will brighten up even the greyest of days.

I love how easy these are to apply all if the prints are so cute and they last!

I ordered this pack and another as soon as they were announced. I've been wanting to try these semi cured gels and jumped at the chance to try some from AF. Application was a little tougher than I anticipated and I do my own gels and poly gel extensions. The gel strips were all a little large for my nails but I made it work with the smaller of each design (I do have smaller hands). But that means I really can't use about half of the gels I received because they're just too big. I was able to use 2 on my big toes (they were that big) and did regular gel on the other toes so at least those didn't go to waste.

As I applied them I realized this design wasn't as cute as I had thought because I was applying it to short length nails and cutting a lot of the design off. These would probably be better on longer nails. Keep in mind how the design will show up on your nail length - I also ordered the checkered design and I think that one will be better on short nails because the design is consistent throughout the strip.

The gel strips were very sticky and took some adjusting to sit right on the nails esp since they were kinda big and you need to leave a slight gap around the sides so the clear topcoat can seal them down. I don't think I left enough room though because it's been just over a week and they are lifting around the cuticles and catching my hair when I wash my hair...my least favorite thing for nails to do!! They are also chipping at the nail edge (see picture) but that could be because my nails were pretty fragile and thin when I applied the gel strips and I'm not exactly easy on my nails. 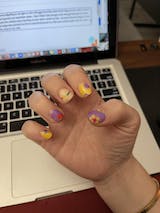