Your new favorite denim. Blue Jean Baby is the perfect navy! She's stylish, wearable and goes with everything - just like your favorite jeans. This deep, midnight blue is highly-pigmented, long-lasting, and fades to a smoky blue. Made to be used on level 7 hair and higher but for richest color, we recommend applying to pre-lightened hair.

#AFprotip: Blue Jean Baby has a smoky quality and can be added to other lighter colors, like Girl's Night, to intensify their hue!

Don't know what level you are? Read all about it here.

I’ve read reviews that have said either this dye works beautifully or not at all. On my hair it didn’t take and turned it an almost aquamarine color and not a true dark blue. I’ve read I can mix it with a few others (mainly purple based) to deepen the blue and I’ll be doing that, but as far as the bottle being a true match was a miss.

I got my hair dyed professionally a while back and they didn't get the color right and I was just super unhappy with it, after spending a ton of money because they needed to do a double-process. Also, I'm pregnant now, so I had to be careful what dye I use, and was told that Arctic Fox is safe in pregnancy - score!
ANYWAY, my hair is probably the darkest on their little sample swatch scale, and had some dye left in it from my previous dye, though that was washing out nearly all over. The color came out rich and dark, exactly what I wanted. After one wash, the color turned smoky in some places and a little green in others (again, I was dying over hair of varying colors, not a uniform shade). The best color is where I was putting it over the purple highlights I had had originally. I think to get the purest blue color, it might be good to mix just a tiny amount of purple in to keep those green undertones from coming through.
Overall very pleased, though 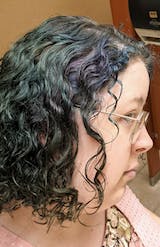 A
Alexa
Perfect alone or mixed!

I got this color and applied it all by itself to bleached hair. Moisturized it so well and looked gorgeous. The photo here shows it mixed with purple rain and I LOVE it. Smells great (as usual) and applies easily. 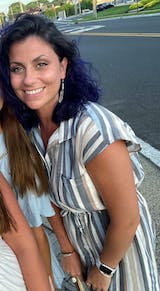